I was going about my morning, looking forward to a productive work-at-home day. I made a cup of tea and went into the bedroom, where I was going to set up my laptop on the slant-top desk I have there. Except  the room was really messy and I knew that would be a big distraction, so I decided to procrastinate tidy up a bit first.

There was a pile of blankets on the floor that have been there for weeks. I figured no time like the present! and scooped them up, intending to carry them down to the basement to join the other blankets down there, for which there is no good storage place. Upon lifting the pile, I observed what appeared to be A SMALL SNAKE, coiled up and resting on the floor. OF MY BEDROOM. I froze. frowned, and looked closely at it. I considered that perhaps (hopefully!) it was one of The Peezer’s toys, which can be routinely find strewn about the entire house.

I wasn’t entirely certain it was plastic, and figured the best way to tell would be to poke it with something really long, so I ran to the kitchen to get the broom which we keep handy, not so much for cleaning, but for occasions just like this. Realizing how absurd I was probably being, I also grabbed my camera and went back to the bedroom to check on my little toy that was surely fooling me, ha ha! 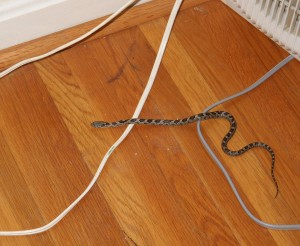 THERE IS A REAL LIFE SNAKE… IN MY BEDROOM!

I knew I had to get it out of there before it disappeared. I further knew there was no one gonna rescue me from this one.  I was on my own! I ran back to the kitchen muttering ohmygawdohmygawdohhhhmaaaahgaaawd! and grabbed some giant barbecue tongs and a plastic grocery bag.  Back in the bedroom, still muttering and now also hyperventilating, I approached my reptilian nemesis (who, fortunately, had stayed put) and gave a first tentative grab with the tongs. He flinched and I shrieked! and dropped him.

“Listen, CRITTER, these tongs and I are MUCH bigger than you,” I explained as I lunged at him again.  “You do not belong in my bedroom!” I ended up grabbing his head and clamped the tongs HARD while he (she?) opened his (her?) mouth in silent protest. I deposited him (IT! No personification for reptiles!) into the grocery bag, then grabbed the BAG with the tongs and carried the interloper out the front door, where I dumped it out, grabbed its head again, and flung it towards the woods, where it ricocheted off of a tree and landed in the leaves.

Then, naturally, I called Curt at work and freaked the hell out.

“I just removed a SNAKE from our BEDROOM he was under those BLANKETS not FOUR FEET from where my HEAD was last night and TONGS and OUTSIDE and DO YOU THINK HE HAS FRIENDS and BASEMENT and HOW DID HE GET IN and WHAT THE OHMAHGAWDHOLYCRAP!”

Now, loyal readers, raise your hand if this story sounds familiar to you.  If it does, you have a good memory. If it does not, and you dig stories about ladies freaking out when snakes enter her personal territory, read this story about the snake skin we found in our grill last spring, almost exactly one year ago.

OK, that’s enough. Remember, I’m supposed to be working today. And if you’ll excuse me, I’m going to pack up my stuff and drive to the public library. They have nice, free Wifi there, and I’m pretty sure the only snakes there are in books.