IN JANUARY, I wrote a post about broken things… specifically, my car, my DSL connection, and Seth's foot. It was just one of those "bad things come in threes" times, where it just seemed everyting was breaking at once.

Well here we are again, friends, it's the sequel, and it's bigger and badder than the original! The biggest issue right now is our roof. You know, the one on the house that keeps the rain out. It was aging when we bought the house and we've been talking about how one of these days we'll have to replace it. We even joked a little bit after last year's fire about how if only the firemen hadn't been so prompt, we might have gotten a new kitchen roof. But we didn't really mean it.

Apparently we have a big bullseye hovering over our property that says MOTHER NATURE AIM HERE!, because there a rare derecho muscled through our area on June 29, and it sent one of our neighbor's fire-weakened trees right into our roof: 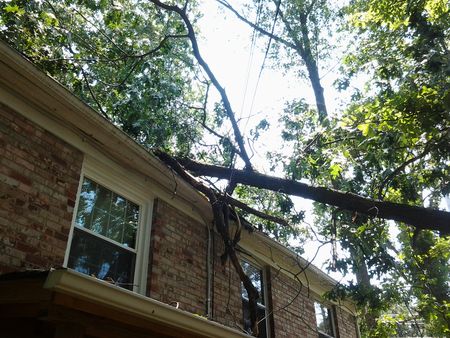 …and it punched a small-ish hole right through. A nice man with a chainsaw happened by, took some of our cash and removed the thing from the roof, then Curt went up into the attic and ghetto-patched it while I started calling roofing contractors. Please know that in a couple of weeks we will be inviting everyone to a party here, where we will make everyone scale a ladder to admire our new car kitchen  major dental work roof. We will serve drinks up there – Solo cups only! – and we will be expecting you to shower us with compliments on shingle color selection, the new skylight, and in particular, the jammin' new roof vents. Bonus points if you also compliment us on our new gutters and downspouts.

That's the biggie. But at the same time, there was a series of smaller malfunctions: Our high-end Simple Human trash can's lid stopped working. (Don't judge; how many times do you go into your trash can each day? It's worth spending money on a good one.) One bolt that secured the toilet seat in the main bathroom broke clean off, and the plastic nut on the other bolt is stripped and we can't remove it. That was enough to send Curt outside to grill dinner, only the gas line seems to have stopped working. The grill's old anyway; we can try cleaning the line, but it needs new burners again and till you buy four new cast-iron burners you may as well buy a new grill. After that frustration, he decided to mow, only he ran the push mower over a small stump and it… broke. The mower repair guy flipped it over, took one look, and said, "You know, we sell mowers here, too…"

So there you have it. Things breaking left and right. But things can be replaced. When the CHILDREN start breaking, it's a whole new ballgame:

Peezer fell off the monkey bars at camp last Thursday. He cried, but "hockeyed up" and hardly complained. He went to camp Friday, then we dragged him up to PA for a family weekend. Saturday afternoon, I noticed he was still holding his arm still and it was still swollen. So yesterday, Curt ran him to the doctor, then for X-rays, then back to the doctor, then over to the orthopedist, and now Peezer has a full arm cast to protect the aligned distal ulnar fracture. And of course, I'm feeling like Mother of the Year for telling him to take a Tufferin and quit complaining.

And that's the second broken bone in our family this year. But at least it wasn't a BAD break! And now Peezer has a cast – he chose red, for the Washington Capitals and Nationals – and he thinks he's pretty cool. Of course, this puts the kibash on swimming for a few weeks, and also puts taekwondo on hold for a while.

I don't like to wallow in self-pity or bitch and moan too much, because when it comes down to it, we really do have it much better than so many people. Things could have been so much worse! That said, we've had more than our share this year. I'm done with breakage. OVER. IT.