YOU KNOW HOW Autumn is so nice? The evenings get cool, the leaves turn colors, and there's a distinctive scent in the air. You get excited to build that first fire in the fireplace. As it drags into November, it starts to get cold outside, and Thanksgiving comes and goes, and then you direct your attention towards the Christmas season. (I'm talking to my fellow Mid-Atlantic / Northeast residents, not you lucky folks in SoCal and Florida with your year-round pedicures and convertibles and whatnot.) By that time, all the leaves have fallen off the trees and you feel like you're viewing the landscape through a sepia-toned filter. And then it's three blurry weeks of evergreen boughs and red bows and twinkly lights and gift wrap and egg nog and carols and parties and cookies and gingerbread houses, and you start to think:

MAN, IT WOULD SURE BE NICE IF IT WOULD SNOW! Some snow would really put me in the Christmas spirit!

And maybe it *does* snow. Or maybe it doesn't. But by the time Christmas rolls around, it's winter here, and sometimes, we get snow. But never quite enough snow, for some! We all watch the weather forecasts and wish and hope, and children wear their pajamas inside out and flush ice cubes (when did this start?) in hopes of invoking enough snow to cancel school. And then maybe, if you're lucky, we DO get enough snow to cancel school! Children rejoice and parents fight over whose turn it is to stay home rearrange work schedules to telecommute.

That's fun the first couple of times, right? There's something about snow that's magical. It's entrancing as it falls to the ground, covering up the midwinter grayness with a fresh, blinding blanket. It makes most of us pause, and in the rearranging of weekday schedules, we are forced to slow down a bit and take it all in. We light yet another in the fireplace and spike our hot cocoa with peppermint schnapps snuggle up beneath fleece blankets. We often get snow around Presidents' Day, and then it's pretty safe to put away the snow shovels and start thinking about Spring.

Today is St. Patrick's Day. March 17.  Three days before the first day of Spring. It is also the 9th day school has been canceled since before Christmas. Outside it's all 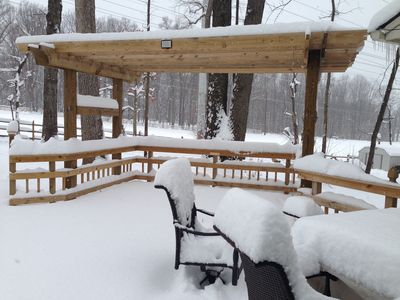 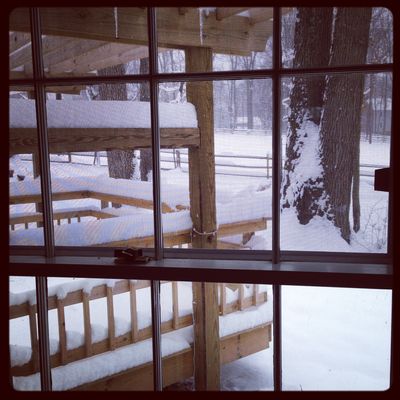 Usually by now, we have daffodils  blooming! They were trying their best last week to give winter the proverbial middle finger: 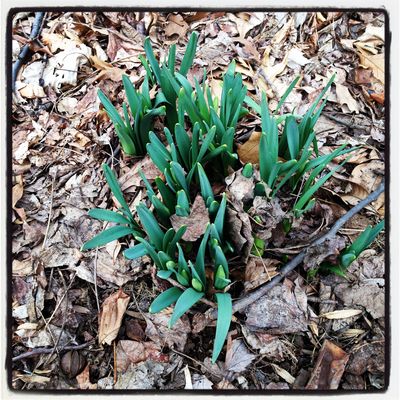 I really don't want to complain about the weather. That gets old. We do enjoy the four seasons around here. As much fun as summer is, I'm always ready for it to end.

But: I remember driving to PA in sleet and freezing rain the week before Thanksgiving, and I recall that same episode of wintery precipitation kept my sister's family from making the trip from New England to join us for Thanksgiving dinner. And that was damn near four months ago, and we've been dealing with unusual cold and more snow than normal ever since.

Dear Mother Nature: YOU WIN. I get it. I promise I will never wish for snow again.

3 thoughts on “The Winter That Wouldn’t End”

Been at it for a month. The pattern calls for most of the second ball of yarn. I’ve got quite a way to go yet. #knittersofinstagram #knitting #saturdayvibes #saturday
Hey @elisabethmartin0 and @schrismartin , we made pasta. Again. Nailed it.
Added my new @wendelwerner sticker to my water bottle. Am officially a fan!
Nothing but trouble here

Follow Soup Is Not A Finger Food on WordPress.com
Bloggenschtern