How did we even manage to live our day-to-day lives in the last century? Everything was so… difficult! And inefficient! I'm so old, I remember way back to the time when one had to go to the television set to change the channel to one of the two other networks. Cameras and computers were completely separate from the devices on which we placed and received calls, because telephones were attached to walls. Cars did not drive themselves. "Navigation" meant unfolding a paper map and planning your route. Parking meters required coins. One had to visit the bank to get cash, and write checks to pay bills.

I have been an adult since the 1990s, and during my time as one, technology has greatly improved how we accomplish so many tasks. I don't take most of these efficiencies for granted. I've been thinking about this a lot lately. Here are several examples that prove our dreams really have come true. Or at least, mine have. A few of them, anyway.

Last week, I spent ten minutes ordering groceries from Harris Teeter's website, then after work I drove into a special lane at the store and a nice young man filled my trunk with groceries and I never had to leave my car. Compared to 30-45 minutes of searching for items in the store and waiting to check out behind that one person who still writes a check and then loading the groceries myself, the $4.95 service fee for their Express Lane shopping is money well spent. And yes, I know home grocery delivery has been available for years (I've used it), but this is the next best thing. If this had been available when my boys were babies, I could have maximized all that driving around I did, hoping they'd stop crying and sleep, and completed grocery shopping at the same time.

When Seth was little, a visionary opened a drive-thru convenience store near where we lived. It was further away than the grocery store, but they had milk, and many other necessities such as Oreos and potato chips. We would go there at least once a week when we had a need for milk. And necessities. Sadly, others did not embrace the genius behind this business model, and it closed after a short time. We were devastated.

Or this: Yesterday at work, I thought to myself, I'm out of cotton balls and face powder and have been meaning to order baking parchment and AA batteries. I ordered these items through Amazon Prime and the delivery arrived in my carport that same day before 9pm for no additional fee beyond the Prime annual membership fee. It has long been the case that if you pay enough money, you can have anything delivered to your home, but when you can have those things brought to your house just as you're cleaning up dinner, that's a win.

Can we all marvel for just a moment that this amazingness is possible through the magic of the internet? From the computer on your desk to the tiny handheld one in your pocket that also functions as a mobile communications device, you can think of something and immediately access the internet to make it happen.

Just when you think it can't get any better, there's this: 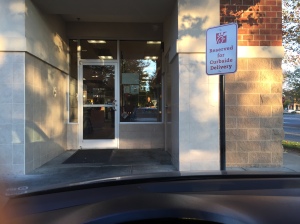 That's my view from the parking spot at the back door of my local Chick-fil-A. One can use a smartphone app to order ahead and pay, and a friendly associate brings your food right out to your car. No one loves a drive-thru more than I do, but my closest Chick-fil-A doesn't have one. Now, it's easier than ever for me to indulge in my favorite breakfast treat, Chick-n-Minis. (It's my exclusive go-to since McDonald's removed the Southern Style Chicken Biscuit from their menu without asking me first.)

These are but a few of so many examples. It's true that most of these "marvels" have been around for years in some form or another. It's just that when you step back and think about how we live our daily lives, well, it's just amazing how much and how quickly things have changed (and, I'd say, improved) in recent years.

I don't care what that one presidential candidate says. You can't tell me American isn't great! It is! These are wonderful times to be alive.

One thought on “These are remarkable times”