LAST NIGHT I finally conducted the Great Lobster Experiment.  You don't remember? That's because I first concocted the scheme last year. You see, in 2002, I suddenly developed an intolerance to my favorite food, shrimp. Not an allergy where the throat constricts, but what I'll gently call a Violent Gastric Reaction.  Took me three tries to figure it out, but once I determined it was shrimp, and also probably scallops, I swore them off for forever. And, I reasoned, as lobster is shrimp's oversized cousin, I figured the shrimp reaction would only be maginified if I ate lobster, so I swore it off, too.

But the I got to thinking how LONG the next 40+ years would be if I could never taste the sweet, succulent meat of a lobster tail, all dripping with butter and delicious. So, I decided to take a chance. I would eat lobster one evening for dinner, in the comfort of my own home, so that if I did end up sick, I could confine myself to the bathroom at one end of the house and send everyone else to the other end, so as to mercifully spare them from the violent retching noises that were sure to ensue.

Yesterday, when I saw lobster tails on sale for $5 each at Safeway, I threw two packs into my cart and practically ran home. "Kids!" I yelled. "We're having LOBSTER TAILS for dinner!"

I steamed them up (the lobster tails, not the kids) and melted a stick of butter. Then I tucked myself into this baby: 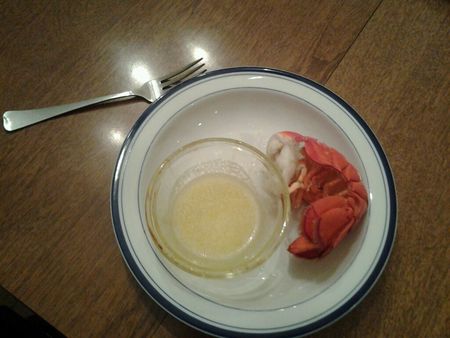 DEAR SWEET BABY JESUS, I Facebooked. IT'S BEEN A LONG NINE YEARS!

It was every bit as delicious as I remembered. Even more so, maybe. I finished this tail, then I ate another one. Butter was dripping down my chin! Children were fighting over the last tail! There was mirth and joy and celebration and bliss! Choruses of angels sang "Hallelujah!" from the heavens!

And then, I waited. If I was going to get sick, I knew the symptoms would show themselves within a couple of hours.

But: Nothing happened. Nary a stomach cramp. Zippy nausea. Nothing unusual forced its way out of either end of my body! I slept like a baby, and this morning?  Well, let's say that all of a sudden, I'm a lot less of a cheap date than I was last week, when I was relegated to the red meat and chicken sections of the restaurant menu.

Next time the Red Hook Lobster Pound lunch truck docks near one of my clients' offices, I will brave the long line for an authentic New England lobster roll.

I can have the lobster at the kids' favorite birthday destination restaurant, Sakura!

Red Lobster? Don't mind if I do! And bring me some of those cheddar bay biscuits!

I'll still steer clear of shrimp and scallops, but look out, all you lobster tails – Mama's back.