I MADE CLAM CHOWDER FOR DINNER TONIGHT. That's not remarkable in and of itself, but one part of the process brought me sadness. You see, our cat, Chuckie, used to meow like a lunatic whenever he heard us use the can opener. Never mind that the last time he was fed from a can that required an opener would have been back in the Clinton Administration: He was conditioned, a la Pavlov, to think that whenever he heard the can opener, it meant his dinner was served. And if the can opener was breaking the seal on fishy contents, like clams or tuna? He became absolutely frantic, urgently MEOWing and nudging and pacing in circles, as if that would make us move all the quicker to spill the can's contents onto a plate placed beneath his hungry face. 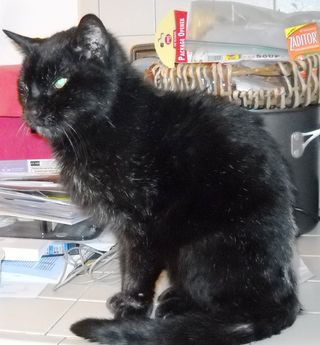 We used to remark how dumb Chuckie was for still thinking, despite a decade or more of pull-top cans, that the can opener meant good things for him. But tonight? I stopped and choked back tears, because after 18 years and 6 months, Chuckie surrendered his fight with old age and unspecified illness yesterday afternoon. He had become progressively weaker, had stopped eating and drinking, and exhibited a host of other symptoms – all cues that his end was drawing near.

Yesterday, I decided to work at home, under the partial pretext of a sick teenager, but in truth, I had a hunch it would be Chuck's last day. When I checked on him at lunchtime, he hadn't moved from what would become his final resting place under the sink in the downstairs bathroom. He barely squeaked out a weak meow.  I stroked his bony body and whispered that it was okay with me if he wanted to go.

At 2:15, running late to pick up two boys for dental appointments, I went down to quickly check again, and found his eyes open, his mouth agape, his body already starting to stiffen.  It wasn't at all surprising, but still, when confronted with the End, the Finality, I was overcome. I placed Chuckie's body in a sheet, covered him, closed the bathroom door, and went to pick up the boys because I WAS LATE, DAMMIT, and how do you explain THAT to the dentist? Oh, sorry we're late, my cat just died. Like, JUST-just. As in an hour ago.

Well, yes, on the surface, especially to anyone who's never been owned by a cat. But anyone who's had a pet for going on two decades knows that they inevitably become a part of the family.

I've written about him before – go here to see my post from his 18th birthday, this past April. There's a video there, too, of the "old git" meowing. Not exactly compelling viewing, I admit, especially if you've never met him. But in that post is the story of how he came to be part of our family – and how he got his name.

Chuckie certainly caused plenty of consternation over the years. There was the time he got into a fight with some unspecified enemy outdoors, returning home with a facial abscess that resulted in a $300 trip to the vet… and a similar incident four years ago, an infection that required a tooth extraction, that resulted in the surrender of six Benjamins. He compulsively clawed the carpet in front of the door of our first apartment. He sprayed our Christmas tree several years in a row. He left a fecal gift on Curt's side of the bed as retribution for our absence one long weekend. One time he brought a mutilated, only half-dead chipmunk into the family room, leaving the poor critter lurching around, desperately seeking an exit, while Chuck looked at us as if to say, "uh, you gonna DO something 'bout that?" He failed to endear himself to either of our mothers by swatting at them when they were simply trying to feed him. He would YELL – MYEEEOW!!! – at Curt the minute he walked in the door from work – FEED ME NOW DAMMIT! - and again in the morning, usually before we were ready to wake up.

However. He slept at the foot of our bed for most of his 18 years.  He'd stopped doing so for the past many-months, as he hated walking on the hallway carpet because his claws got stuck in the loops, but he did make a couple of nighttime visits for old times' sake (the farewell tour?) just two weeks ago. He was nothing but kind and respectful each time we brought home a baby. He wasn't wild about the addition of Mac the Dumb Golden Retriever to the family, but in recent years seemed to happily coexist with the canine. He loved curling up on our sofa-bound laps on Sunday afternoons. He tolerated five different household moves with increasing acceptance each time. The last time he practically rolled his eyes as if to say, what-EVER.

Last night, Curt dug a hole in the back yard, in a spot we can see from our bedroom window. (That, friends, was WORK. When Mac the 90-pound Golden Retriever goes, he is a candidate for cremation!) I fashioned a cross out of two sticks, some gold beaded wire, and a couple of silk flowers. The whole family gathered 'round – even Mac, who seemed to sense the importance of the occasion. We gently lowered our cat into the hole, read a Bible verse, sprinkled some leftover crunchy food over the hole as a symbolic gesture (which we had to explain to the five year old several times, at which point the touching nature of the gesture was pretty much lost), then refilled the hole and planted the cross. This weekend, we'll hold a proper Irish wake (oh come on, you didn't think we'd miss that excuse for a "party", did you?), then I plan to bust out the arts 'n' crafts box to make a grave marker.

And life, of course, goes on. I've already discarded the litterbox (hooray, I have my foyer back!) and bagged the leftover cans of food to give to a neighbor (or a shelter). The bathroom where Chuck chose to spend his final hours has been thoroughly cleaned. And Seth said to me tonight (already!), MOM, you know we're getting another cat, don't you?

Ugh. Sure, probably. But not anytime soon.

15 thoughts on “Of cats and clam chowder”